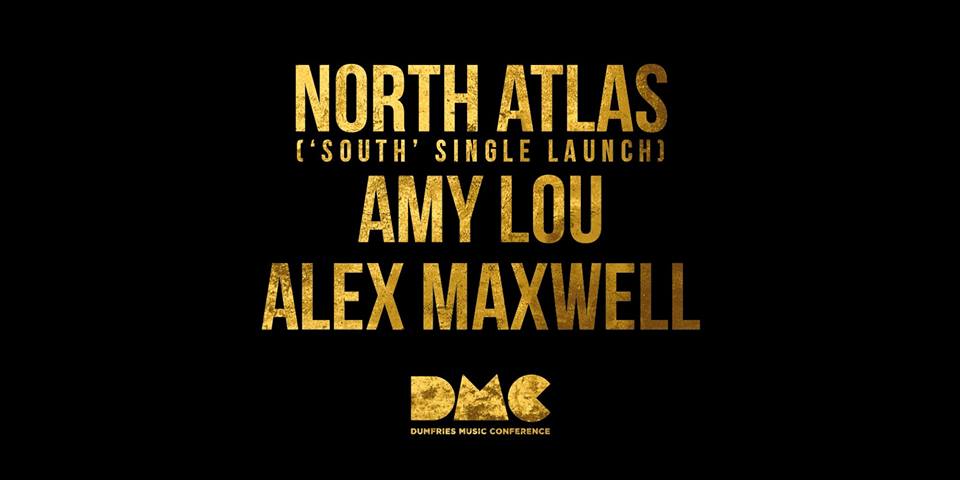 DMC 2019 Programme Launch and North Atlas ‘South’ Single Launch.
With support from Amy Lou and Alex Maxwell.
Dumfries Music Conference presents:DMC 2019 Programme Launch and North Atlas ‘South’ Single Launch.With support from Amy Lou and Alex Maxwell. Friday 20th September / 7pm / £5
North Atlas
Cinematic sounds and a thunderous live presence, Scottish Alternative trio North Atlas provide a fresh perspective to the genre as a band of brothers whose contrasting influences combine to defy the traditional sensibilities of a rock ‘n’ roll band.
The entire outfit, Leon D Hunter, Cam Hunter & childhood friend Liam ‘Rusty’ Russell, grew up by the Solway Firth in Scotland, drawing influence from its wild affecting landscape, dominated by monolithic wind-farms and radar domes. Their recent singles ‘Another Ocean’ and ‘Volcanoes’, produced by award-winning producer Dan Weller (Enter Shikari, Young Guns), gained traction on Kerrang! Radio while this summer saw the band traversing an eclectic mix of festivals, ranging from France’s boisterously electronic Chateau Perche to a roaring headlining slot on the Seedling’s Stage of Inverness’ hallowed Belladrum festival.
This Autumn sees North Atlas ready to present its latest effort ‘South’, again produced by Weller, but this time with the band being compelled by personal forces to present a more direct, honest and raw face than before, resulting in an uninhibited lyrics over primal drum and guitar lines and a co-production credit from one of the band members themselves.
Amy Lou
Feisty Indie Pop with a wee Scottish Growl , Amy Lou will have you singing for more after every chorus. From the musically historic town of Dunfermline , Amy Lou and her boys are breaking the waters and gaining industry attention having had an amazing year of live shows with a number of packed headline gigs under her belt, including festival appearances at XPONorth , Gig In The Goil , King Tuts Summer Nights And Outwith Festival. The remainder of the year is looking as bright as yer maw declaring its “like Blackpool illuminations in ere” for the young indie upstart.
Alex Maxwell
A BBC Introducing artist, Alex Maxwell performs solo, duo and with a 5 piece band. Alex started playing on a consistent basis across Edinburgh at the start of 2015. The songs have taken shape from this. The lyrics are semi-autobiographical and the music has shifted gradually from being troubadour-like to include upbeat singalongs. The music ranges from upbeat finger picking folk to full on indie-folk-rock-pop songs with hooky vocal lines for singalongs. Alex’ vocals are inspired his favourite bands in the the Scottish indie scene, he is inspired by the the energy and imagination from The Tallest Man on Earth, the punk rock sense of honesty from Frank Turner, the delivery from Villagers and Bright Eyes and the free flowing melodies of Vance Joy and Shakey Graves.
+ Google Calendar+ iCal Export