Reel to Real Cinema At Home: The Battle of Orgreave 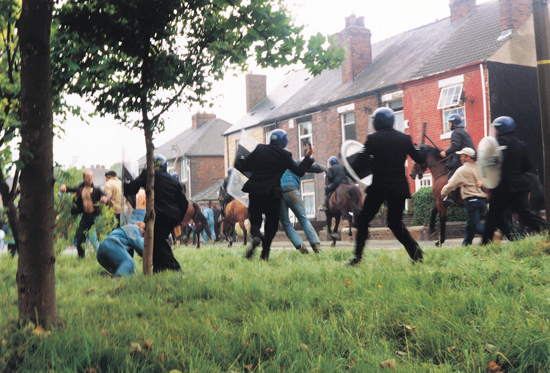 This month we are going a bit lo-fi. As we look to explore how we can use collective film watching at home as a means to gather, share ideas and connect we’ve been delving through the vastness of the internet to source interesting and relevant stories for now, on film.
This month, we will be watching together The Battle of Orgreave, a documentary by filmmaker Mike Figgis of the large scale public artwork created by Jeremy Deller in 2001 to re-enact the clashes between police and miner strikes in 1984 in Yorkshire.
The film will be made available here, on this page at 8pm on Friday, 12thJune – please just re-fresh the page at the time and it will appear.
We’d also love if you could stay for a discussion about the film, the artwork and the strikes, which will take place using Crowdcast also on this page, at 9.10pm on Friday, 12thJune.  Please register in advance for this details here:
There will be a live chat in the run up to and during the film, so let us know that you are watching and any questions you have!
We are sharing a publicly available film so we are unable to support with any quality or technical issues but hope that by keeping Reel to Real free at the moment we can allow as many people to participate as would like to!
For more information contact katie@thestove.org.

About The Battle of Orgreave

“In 1998 I saw an advert for an open commission for Artangel. For years I had had this idea to re-enact this confrontation that I had witnessed as a young person on TV, of striking miners being chased up a hill and pursued through a village. It has since become an iconic image of the 1984 strike – having the quality of a war scene rather than a labour dispute. I received the commission, which I couldn’t believe, because I actually didn’t think it was possible to do this. After two years’ research, the re-enactment finally happened, with about eight-hundred historical re-enactors and two-hundred former miners who had been part of the original conflict. Basically, I was asking the re-enactors to participate in the staging of a battle that occurred within living memory, alongside veterans of the campaign. I’ve always described it as digging up a corpse and giving it a proper post-mortem, or as a thousand-person crime re-enactment.”

Coming soon! The film will appear here at 8pm on Friday, 12th June.