When Attending a Stove Event

We strive to make sure that all in attendance to a Stove event have a safe and enjoyable experience. When booked to attend a Stove event, the following should be adhered to: 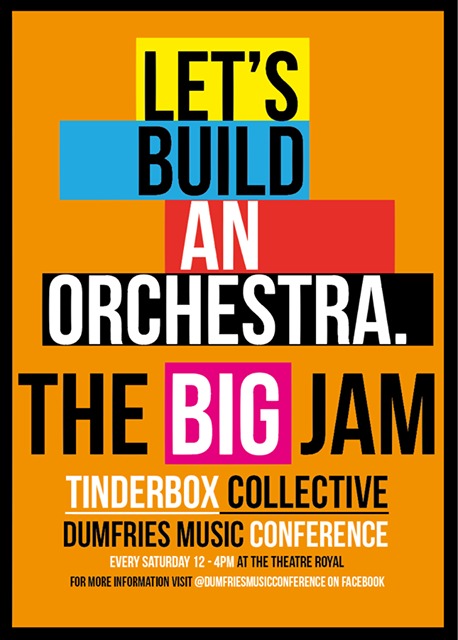 Starting from 22nd April
Workshops with one of the country’s most innovative and experimental punk orchestras as part of DG Arts Fest. Open to intermediate musicians, ages 12 – 30.

Tinderbox Orchestra will collaborate with Dumfries Music Conference to undertake a five-week project in Dumfries during April and May, which will culminate with the group’s performance at the town’s Theatre Royal on 27thh May. The ‘punk orchestra’ will hold workshops on five consecutive Saturdays, starting on 22nd April.

Each workshop will give participants an opportunity to play with a real-life orchestra and learn the craft of scoring an orchestral composition to go along with their own performances and song-writing endeavours.

Participants are invited to attend all or some of the sessions and to bring along their instrument, so that they can play with the group. The sessions will focus on a different piece each week – these will interweave around writing a group composition.

Founded in 2010 as a small community youth orchestra with a difference, Tinderbox has grown to become a ground-breaking youth arts organisation, charity and social enterprise. It now works with hundreds of young people each year and has produced a number of award winning productions, working with local communities in Scotland, as well as with international collaborators in China, Chile, Croatia and Bosnia.

Tinderbox aims to ignite a spark in young people; one which fills them with confidence, imagination and a sense of possibility, and which enables people to achieve things they never thought possible. Its work helps break down barriers between people and communities, providing exciting opportunities to those who need them most, and supporting young people to build their confidence, skills, self-esteem, and professional experience.

Tinderbox Orchestra is a fusion of instruments, styles and people. An orchestra with the approach of a band, we write and perform original compositions and collaborate with exciting, contemporary bands & artists.  We love to experiment with ideas, collaborate, and try to do something new and inspiring with an orchestra.

Tinderbox Orchestra will be performing at the Theatre Royal as part of the Dumfries and Galloway Arts Festival on Saturday, 27th May. Full details here