Make a Film for Whose Hoose is This!

D-Lux have turned a whole building into a video jukebox called ‘Whose Hoose is This?’ – a major project for the town commissioned by The Stove Network for the Midsteeple Quarter Project with support from Dumfries and Galloway Council. After dark, specially made 30 second films are projected in the four bay windows of the former Baker’s Oven, all made by people living in Dumfries and beyond. Viewers in the square can select which tracks they’d like to appear on the building by using their smartphone to visit www.whosehoose.com.

Whose Hoose is This? is part of an ongoing project to revitalise Dumfries High Street and to get people thinking about this area as a place to live. Dumfries High Street and the streets around it used to be a highly populous area. Many of the properties were, by the early 20th century, in a very poor state of repair and the area was condemned as a slum. The final phase of slum clearance took place between 1956 and 1963. During this period, over 3000 people were moved out, mostly to new housing in Lochside and Lincluden.
In the fifty years since, the remaining population of the High Street has dwindled almost to zero and many of the old buildings, particularly those of the old closes and ‘lands’ behind the High Street, have been demolished. For a while, commerce filled the gaps, with shop units becoming larger as national companies bought up and amalgamated adjacent properties 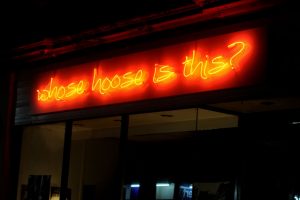 The Hoose will be up and running daily from sunset until late and viewers in the square can select which tracks they’d like to appear on the building online using their smartphones. The Hoose will be running Saturday 28th April, and during this time D-Lux will be working with groups from different areas of Dumfries to create content for the windows, with regular updates being made to the available track list.

Want to get involved? Why not make a film! Make tracks for the Jukebox is easy and over the next few months D-Lux will be hosting various workshops around Dumfries. Head over to their Facebook page to keep up to date with their events: www.facebook.com/dluxfestivaloflight. If you can’t make any of the workshops and would like to make a film, visit www.d-lux.org.uk for instructions. If you have any questions, you can pop in The Stove and speak to Kirstin. 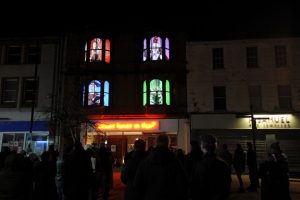