Lowland: A Play for Your Ears In Two Chapters 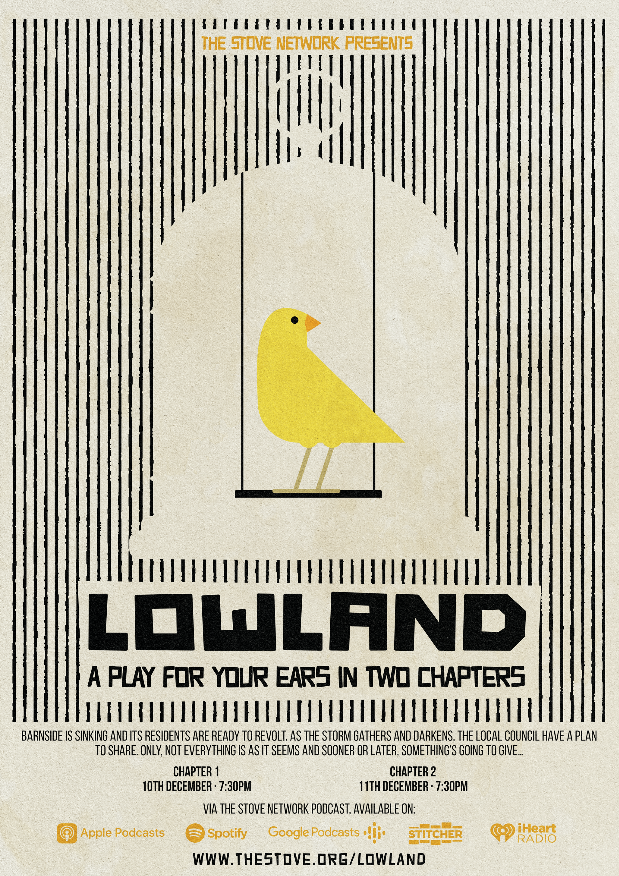 Barnside is sinking and its residents are ready to revolt. As the storm gathers and darkens, the local council have a plan to share. Only, not everything is as it seems and sooner or later, something’s going to give…

An audio play in two acts, inspired by over 500 postcards reflecting on life in Dumfries written by Doonhamers. Lowland: The Play features a community cast, devised through collaboration with local writers’ groups, communities and members of the local council, Lowland is the tale of a consultation gone wrong.

As Angela, a council officer, prepares for a consultation, one year in the making, her boss throws a curve ball, eradicating all her best intentions, leaving her and her assistants in disarray and woefully unprepared. As a storm rages on outside, a community prepares a coup d’état…

Lowland is a dark comedy, offering a satirical look at the nature of community, power, local democracy and belonging.

Initially due to be performed in Dumfries, Langholm and Moniaive in March 2020, the play has been re-imagined as a podcast play in two chapters due to the COVID-19 pandemic.

To Listen to Lowland 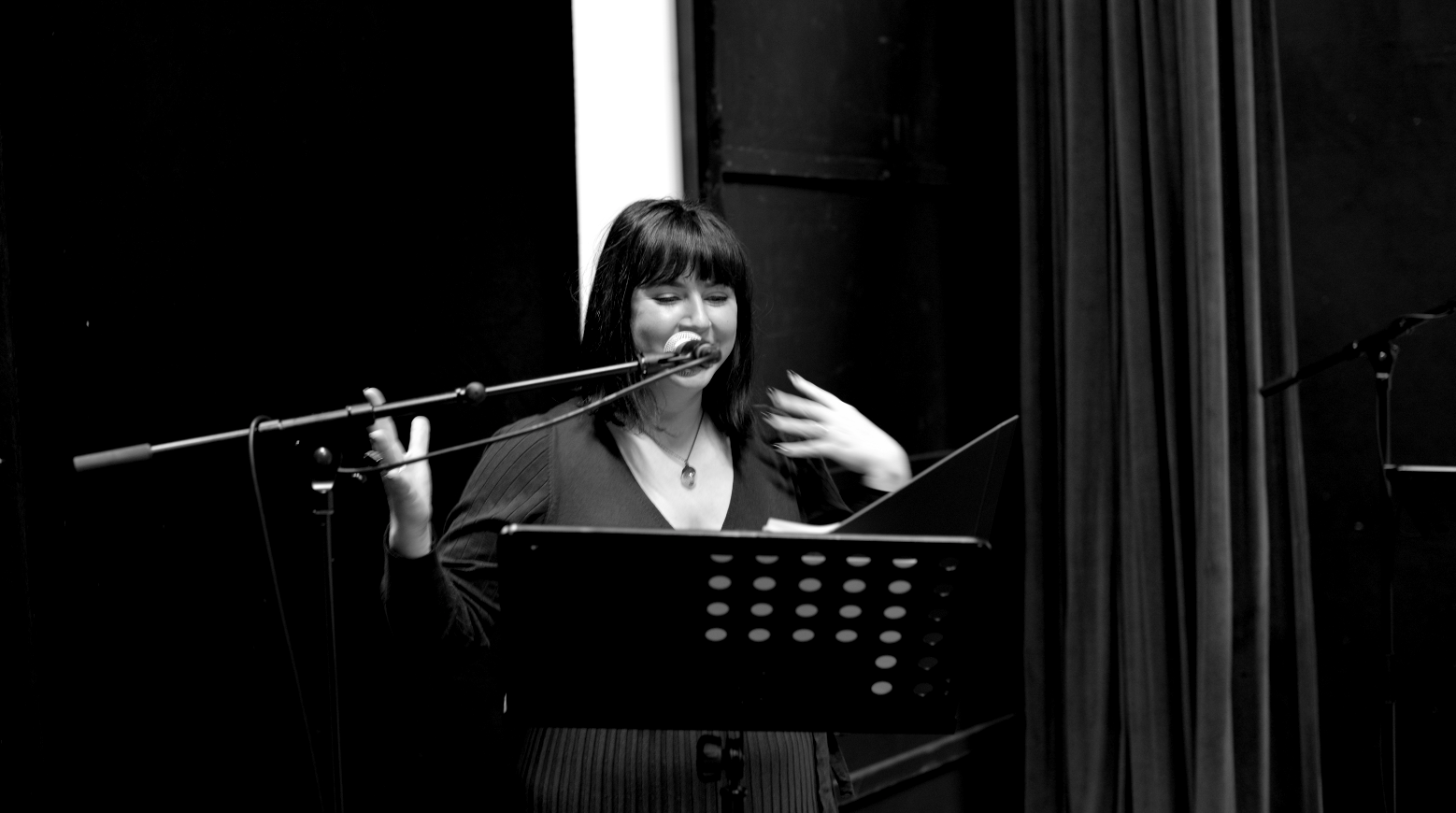 Originally from Manchester, I have been living in Dumfries and Galloway for the last 3 years and loving every moment! Last year I had my first children’s book published and I work as a storyteller specialising in inclusive storytelling and creative learning. Usually choosing to remain backstage, I couldn’t resist returning to acting for this project once I had read the script. I have been thoroughly enjoying playing Angela and am looking forward to sharing Lowland with all of you. 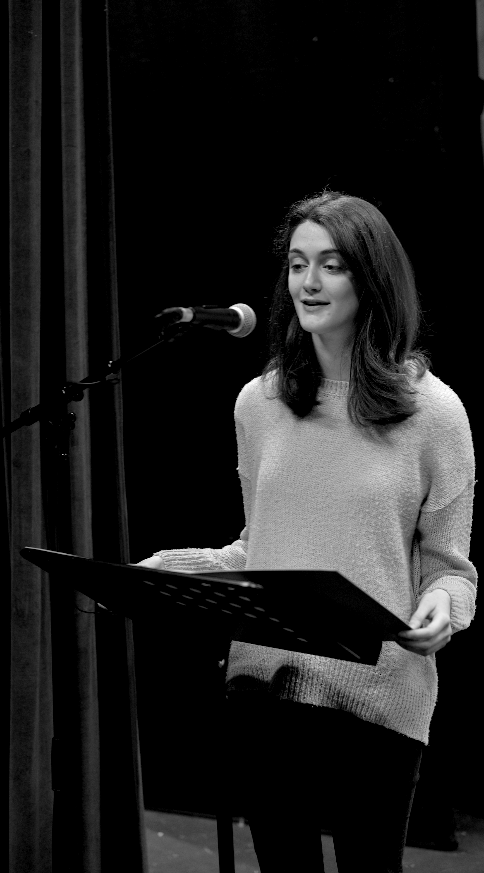 Chelsie Nash is a performer and writer from Dumfries. She has a keen interest in a variety of genres – recently focusing on comedy – and specialises in short one-woman shows. She’s a Brave New Words regular, where she puts on short character performances involving story-telling, comedy and poetry.

Chelsie supported the Sonnet Youth production of Drew Taylor-Wilson’s ‘thick skin-elastic heart’ at the Theatre Royal, Dumfries in October 2019. She also took her act to Warwick Bazaar, Carlisle, as the support act for a music gig in December 2019. She recently became a member of the Performance Collective Stranraer, and participated in their first residential Development Lab of 2020.’ 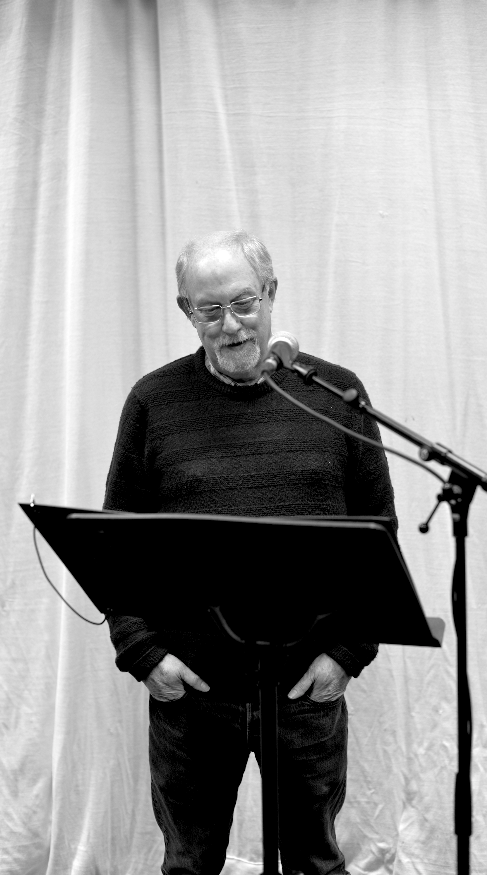 ‘I’ve been a member of the Guild of Players since the early eighties and have been involved in acting, directing and most of the backstage departments. This has been my first taste of working on a radio play and I’ve enjoyed the experience.’ 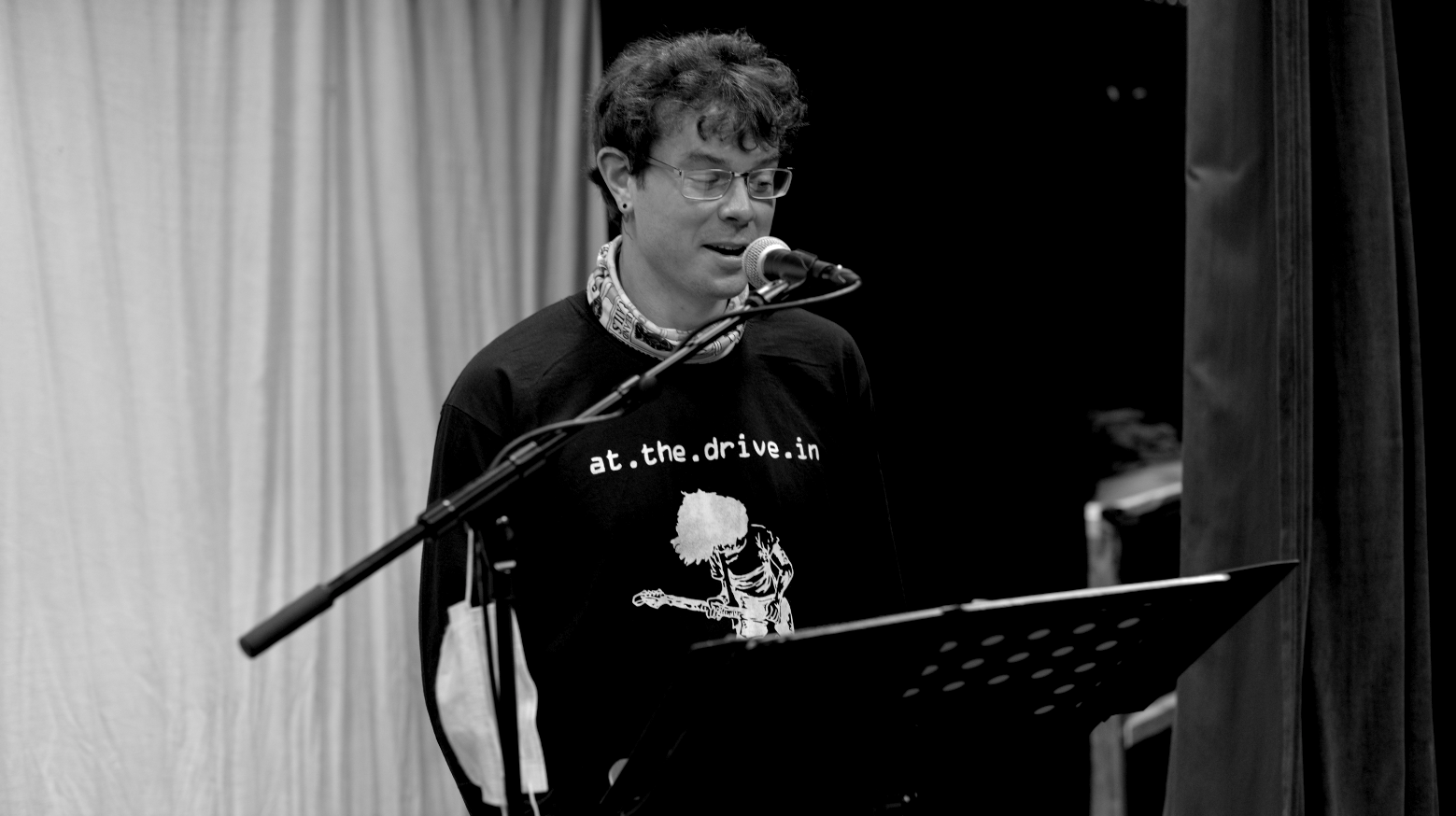 A writer and performer based in Dumfries, Michael is playing the role of Terry.
‘It’s an astute and fantastic story about the time we live in – straight from his brain, but written with his heart…
With its cast of exciting performers – and an ingenious behind the scenes team too – we can’t for you to hear it.
It is a pleasure to be involved.’ 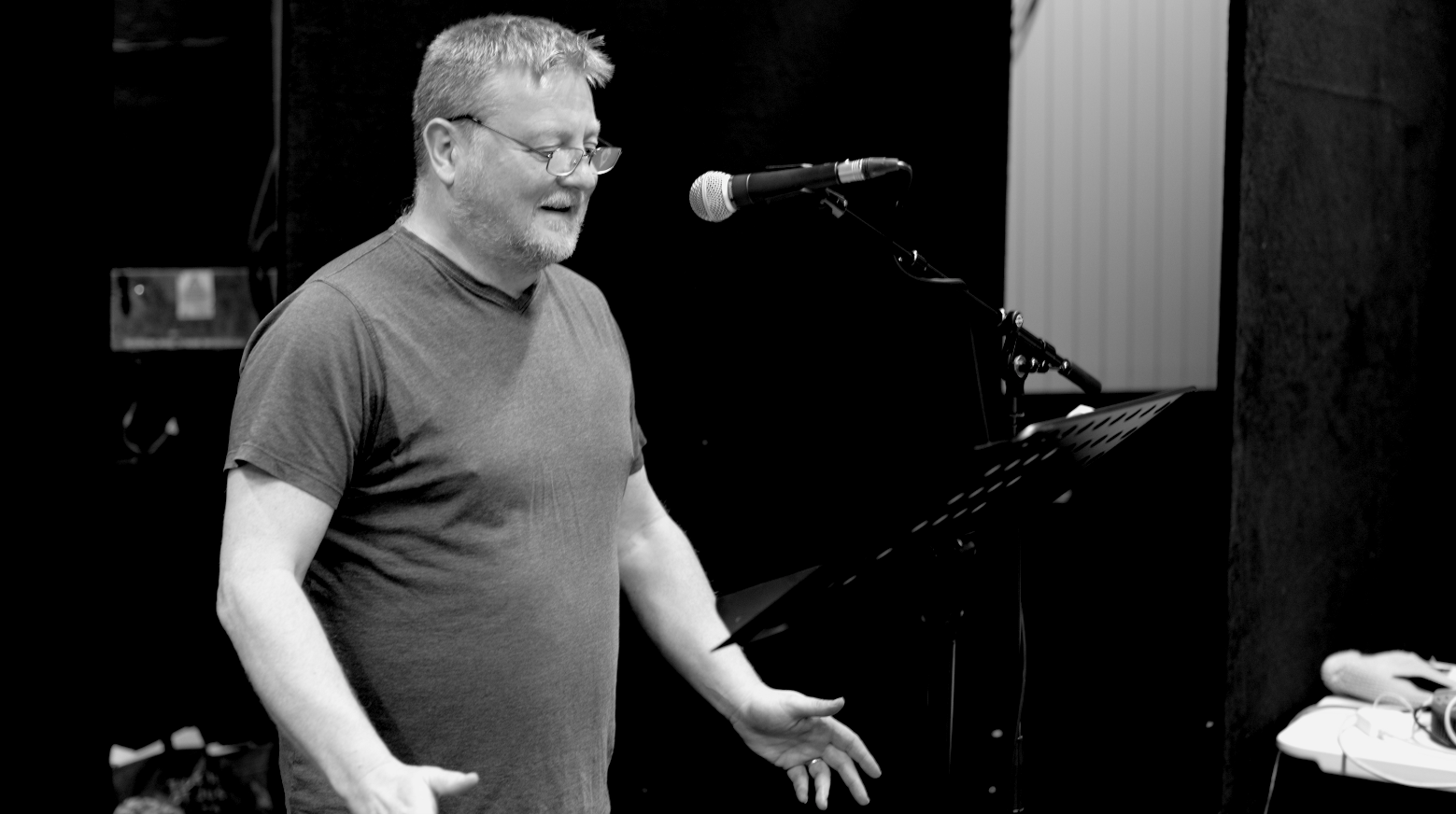 Tom is a full time teacher, musician and actor having performed and worked with Big Burns Supper on Le Haggis from its humble beginnings to its Edinburgh festival stint, as well as this, Tom is a  principle actor within the Dumfries Theatre Royal Guild of Players, performing in over several productions over the years.

A writer, artist and curatorial member of the Stove Network. Founder and director of Brave New Words, Martin is the lead artist for the Lowland project.

‘Lowland is the story of a community consultation, gone awry.

It centres on the story of Barnside – a neighbourhood that has been left to detoriate amidst a ten year ‘regeneration’ plan that is frankly a little bit dodgy.

When Angela arrives to do a consultation with the community on what she believes is about re-location options, her boss changes the plan, eradicating all her best decisions and leaving her in the midst of an ethical dilemma due to an offer she just can’t refuse. As a storm rages on outside, the community is primed for revolution.

The play itself was developed and written over the latter part of 2019, working alongside local writers and using interviews with former council workers to develop much of the story. The work is largely inspired by the Lowland Postcard project a couple of years ago, in which the project’s writer in residence Stuart Paterson managed to amass over 500 creative writing responses reflecting on life in Dumfries.

While the play is entirely fictional, there may be some subtle, and sometimes, not all that subtle, references to our own town of Dumfries and some … let’s say ‘projects’ that this may be inspired by.

Originally, the work was due to be performed in March 2020 until the Covid pandemic and its subsequent lockdown forced us into the position of postponing. Realising over the year that live events were likely not to happen any time soon, we worked to reimagine the play in the form of a radio or rather podcast drama.

Featuring a community cast made up of local writers, performers and actors all of which have donated their time, talent, energy and life to the project over the course of what is likely to be now a year, I am delighted to finally be in the position to present to you Lowland: a play for your ears in two chapters.’ 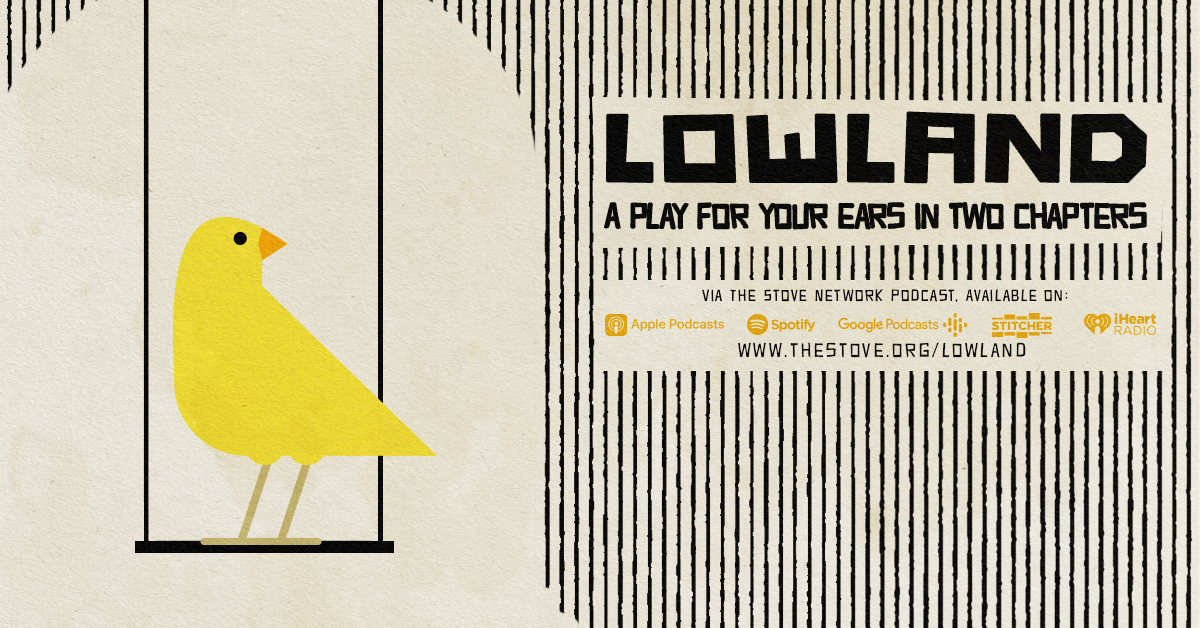