The last time I baked was some 30 years ago; Hot Cross Buns. They turned out like hot cross rocks. Inedible. I decided then it was time to give up on home made bread and yeast as my track record was littered with failures.

Fast-forward some thirty years, and, due to a series of events, I found myself attending the Douglicious gathering. To be more accurate, as a new recruit at The Stove, I was facilitating it. I meeted and greeted and made teas and coffees. And I watched and listened. 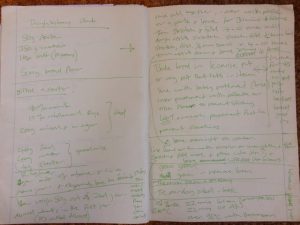 They were preparing sour dough. Liz, the wonderful woman who initiated Douglicious, handed out sour dough starter to all those who had brought with them flour and a bowl. She brought extra bowls and flour for those who hadn’t brought their own, so everyone had the opportunity to have a go.
I looked on. I was fascinated. I knew nothing about sour dough and I’d never, ever, thought about baking my own. I became engrossed and wanted to know more. When the dough was resting, we all sat around the tables, tasted samples people had brought with them, and talked about bread. I joined in. 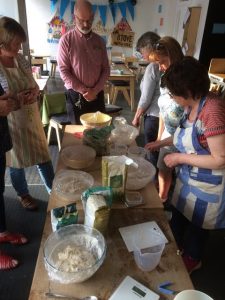 I asked so many questions and Liz and the group were extremely accommodating, answering all of them. I took notes. At the end of the evening, Liz offered me the dough she had prepared. I hadn’t participated in the dough making, so was thrilled to be offered the sour-dough-in-the-making to take home and finish. I stretched it and rested it four times before going to bed.
The next day I baked it and it turned our perfectly: completely edible and delicious. Liz also gave me my own sour dough starter and I’ve been baking (dare I say) perfect sour dough loaves at home ever since. Who’d have thought it? Certainly not me. 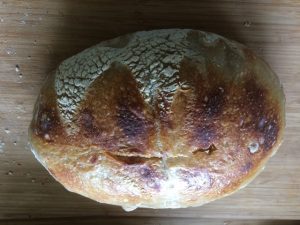 Interested? The next Doughlicious event is on Wednesday, 17th July at 7pm. Full details available here