Many have suggested simple solutions to the French Paradox, the apparent contradiction that the French can eat rich, fatty foods while maintaining a lifestyle much healthier than many their counterparts in the western world. Could it be all the red wine? Or maybe its something in their genetics? The answer, as Will Marshall explained in his introduction to the Open Jar Collective’s “Feeding Creativity” event, is likely much more complicated than that, and is a clear indication that our attitude towards food has a fundamental effect on our everyday lives. From how we socialise, to how we interact with our surrounding landscape and, importantly, how we create, Will understands that our relationship with food shapes us as individuals and as a community, capable of bringing us together and prompting what he calls “unexpected interactions” across all sorts of social and cultural boundaries. For him and the rest of the Stove team, the prospect of opening a cafe Dumfries town centre is much more than a simple business venture. On the contrary, the Stove sees its future cafe not just as a place to drink nice coffee but as lively hub that will bring the community together, be it to participate in the events or activities facilitated by the Stove network or just to enjoy good quality local produce, sourced from across the region. 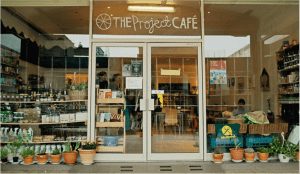 The Project Cafe in Glasgow, one of the cafe’s cited by Open Jar in their exploration of Creativity and Food

To fulfil this vision, the Stove has enlisted the expertise of the Open Jar Collective, a group of Glasgow-based artists who specialise in all things food. Open Jar have been carrying out extensive research to in order formulate an operational plan and identity for the cafe, analysing similar projects undertaken by other arts organisations in the UK (Glasgow’s Project Cafe was offered as one such example) and meeting with local producers such as the Loch Arthur Farmshop. Feeding Creativity represented another stage in this process, a 2-hour event held at 100 Midsteeple in which they invited anyone with an interest in food and creativity to have their say about what they’d like to see from a new eating spot in the town centre – and to share some tasty soup and bread in the process. Attendees included caterers, health workers, business owners and civil servants amongst other professionals, all interested in leveraging the cafe’s prime location and the region’s ample culinary resources to enrich the town and the lives of its denizens alike. Splitting into groups, they identified problems currently ailing the town and suggested some ways these could be addressed, resulting in a sort of mission plan that might inform the functioning of the cafe in its finished form. Chief among these was the need for a place to meet after shopping hours that isn’t a pub, giving young people a chance to get out of the family home and giving community groups somewhere amenable to convene on a regular basis. Another was the desire for a knowledge centre where townsfolk can share their passion for food, be it cooking skills, growing techniques or healthy eating advice. 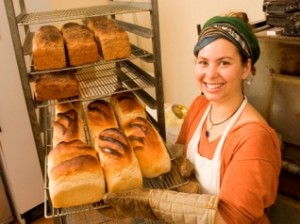 The Bakery at Loch Arthur Farmshop

All in all, Open Jar were met with an enthusiastic response and left with plenty of ideas to work with, ending the night by assuring that further public consultations are in the works. With the cafe due to open in time for Guid Nychburris, the Stove is keen to get as many people excited about food’s potential to bring about positive change as they can in the coming months, ideally resulting in a space that the people of Dumfries can feel invested in and responsible for, and which gives the town centre a whole new lease of life.  If Feeding Creativity is any indication, it’s off to a great start.