The Source to New Cumnock & Kirkconnel

The Source of the Nith

Some people believe that the Source of the Nith is located in the Lowther Hills to the east of New Cumnock. However, after studying maps and tracing back the river it is apparent that while the river reaches its most northern point near the Lowther Hills, it actually originates further south, from a location nestled in the range made up of the Carsphain and Scaur Hills. The range doesn’t have its own official name but local communities that live around the hills each have their own claims to the area.

Stone Circle near the Source

The Carsphairn Hills have some hidden gems but they are hard to find. One of which is a Neolithic stone circle located about half a mile from Nith Lodge. The circle originally consisted of 15 two-metre standing stones and when excavated by archaeologists, a battle-axe was found along with evidence of a burial mound. The closest village to the site is Dalmellington, East Ayrshire which has a wealth of heritage including an impressive Medieval Motte.

The towns and cities of Scotland expanded rapidly during the industrial revolution of the 19th century. When you see the grand edifices of Glasgow and Edinburgh you may not immediately think of a town deep in the hills of South Ayrshire, but much of what fueled this great wave of change actually originated in places like New Cumnock.

Coal mining started in the area around New Cumnock in the 18th century and by the 19th deeper mines and a new trainline helped turn it into a thriving town. Many of the impressive buildings built during this period can still be found today.

The closure of the mines from the 1960s onwards had a significant effect on the town, as it did in all towns across the country linked to coal mining.

The work of the Coalfields Regeneration Trust celebrates and builds on this legacy, ‘leading the way in coalfields regeneration to restore healthy, prosperous and sustainable communities’.

Dumfries and Galloway played an important role in the Scottish Wars of Independence. Robert the Bruce, who would become King Robert of Scotland, found the region to be a source of support and respite as well as the location of a near miss near New Cumnock. Edward II wanted to send a clear message to the Scots by quashing Bruce’s rebellion. He and his army traveled up through Nithsdale, likely shadowing the river Nith itself and set up camp at Cumnock Castle. Robert managed to evade capture by using the hills around New Cumnock to outflank the army of Edward and escape in order to continue raising support for his cause.

New Cumnock has a proud history that stretches back centuries. A great way to learn more about this, to see the key sites and to enjoy the other parts of the townscape is by walking the Auld Kirk And Village Heritage Trails.

On Thursday 7th September 1950 heavy rain caused part of a glacial lake to collapses and sent a flood of peat water into the Knockshinnoch Castle Colliery. 129 men were trapped below the surface, their escape routes blocked by the flood water.

Fortunately, 116 managed to make their way out and walk free with the help and support of the rescuers’ efforts. Sadly, 13 men never emerged. Their bodies were found years later and now rest in Afton cemetery.

The story of the Knockshinnoch disaster was also made into a feature film in 1952 named ‘The Brave Don’t Cry’. It explores how the human spirit endures even in the darkest of moments.

Founded by Mostly Ghostly, the Festival of Folklore is a new Scottish festival, celebrating the world of folklore, and set in the mythical landscapes of Upper Nithsdale, Dumfries and Galloway. Inspired by the area’s stunning natural beauty and colourful tapestry of history and legends, the Festival aims to encourage people to discover Upper Nithsdale, and immerse themselves in its history, heritage, myth and magic.

Sanquhar post office has the unique distinction of being the oldest post office in continuous existence in the world. It opened in 1712 and for over 300 years has been keeping Sanquhar connected to the world and the world to it. Recognised by the Universal Postal Union and Guinness World Records, it is 8 years older than its nearest rival in Stockholm, Sweden. It is also well known for marking letters with its hand stamped ‘The World’s Oldest post Office’, which attracts enthusiasts and people from around the world.

One of Britain’s most dramatic castles can be found nestled in the hills of the Southern Uplands. Drumlanrig castle is considered one of the finest examples of 17th Century Renaissance architecture in Scotland. Paid tours of the castle operate between April and August through which you can explore its magnificent architecture and interiors and experience a part of Scotland’s history.

Although no longer in existence, the world’s oldest curling society was founded in Sanquhar. Curling was a popular sport in Scotland during the 19th century and much of this popularity was due to the actions of enthusiasts. On the 1st January 1774 sixty local curlers met to play on the Black Loch of Sanquhar Moor. After this, they met at the Queensberry Arms and founded the Sanquhar Curling Society. Some very interesting documents about the society and its formation still survive which give not only a glimpse into the history of curling but also the people of Sanquhar itself.

Morton Castle originates from a fortification built in the 12th century in a strategic location above Morton Loch. It was clearly seen as a valuable asset as it was converted into a castle around the early 14th century and was owned by the nephew of Robert the Bruce, Thomas Randolph, a key ally in the wars of Scottish Independence. Morton castle was demolished in 1346 along with 13 other Nithsdale castles in exchange for King David II, who had been kept captive in England. In 1936 the Castle was re-built by the new Earl of Morton who was inspired by the triangular shape of Caerlaverock Castle just south of Dumfries. The remains of the Great Hall still stand today after being abandoned in the late 18th century. Its impressive architecture, interesting history and beautiful location make it a great day out.

Right at the top of the Lead Hills lies Wanlockhead, one of the Highest Villages in Scotland. It is a village with a wealth of heritage and at the top of the list is an 18th century lead mine and museum where you can actually take a tour through the mines! It is the only underground mine tour functioning in all of Scotland. You can experience how miners lived through the centuries, check out the miners’ library and have a look at what the miners dug up. One of the other fascinating activities the museum has to offer is the opportunity to go gold panning! Whether it be a taster session or taking part in the gold panning championships you could find real gold!

The bustling village of Moniaive sits on the Cairn Water, one of the major tributaries of the Nith. It has long been associated with famous people such as Robert the Bruce, King James IV, Bonnie Prince Charlie, Robert Burns, singer Annie Laurie and artist James Paterson. Today, it is well known as a hub for artists, photographers, musicians and other creatives. A great way to learn more about the village and the local area is to enjoy the Moniaive History Trail which helps you discover monuments and places of importance and gives a fascinating insight into its over 1000 year history.

The origins of Thornhill might date as far back as the Romans where they used this route to access the west of Scotland. In the 1600s there was an established settlement here, complete with a mill, though a wooden bridge over the River Nith built in the 1400s to provide a route to the west had already been lost in a flood. Thornhill’s past and present show the importance of its location in connection to the river Nith and the connection between Dumfries and Galloway and Ayrshire.

Kirkpatrick Macmillan, who hails from Keir Village, Dumfriesshire, is credited as the inventor of the first ever pedal pushbike! Although Kirkpatrick did not patent the invention he is still recognized as the creator of the machine that revolutionised the way we travel all around the world. Born in 1812 in the small village near Penpont, Kirkpatrick became a blacksmith and took inspiration from  a Hobby Horse toy and developed a frame with pedal mechanisms that became the world’s first ever bicycle. You can visit the plaque in Keir village today that sits on his home, Courthill Smithy. 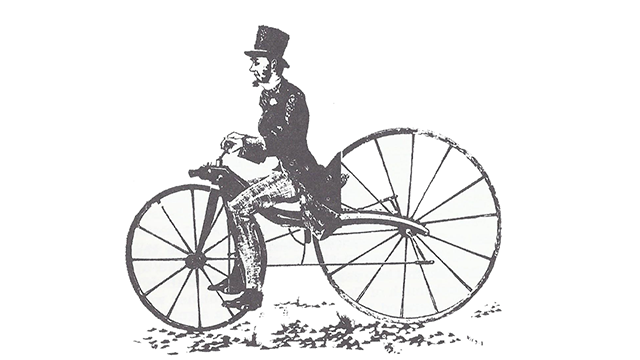 Tynron Doon is an impressive iron age hill fort outside the village of Tynron. It lies at the southern edge of the Scaur hills, was built in a commanding location and to this day offers stunning views of the surrounding countryside. It was first occupied around the 1st millennium BC, but people were drawn back on and off to live there until the 16th century. It was also the site of one of nine beacons maintained by the Sheriffs of Nithsdale and Annandale in the 15th century, where watchmen could light fires to warn of enemy raids. One of the best ways to enjoy this significant and ancient site is through the Auchengibbert Hill and Tynron Doon walk.

If you have any enquiries, please get in touch below:

Back To Main Page