#OpenMouth – If you thought nothing cool ever happened in Dumfries…

If you thought nothing cool ever happened in Dumfries then your mind must have been truly blown by the recent Open House series of events at the Stove. If you missed it, then I’m sorry its not Dumfries that’s uncool my friend – its you!

On Tuesday 28th of April The Stove opened its doors to anyone wanting to have a go at the fashionable art of Spoken Word. The all-day live event was called Open Mouth and promised to wow audiences with local and national talent whilst providing support and encouragement to keen youngsters with a raw thirst for poetry slamming. 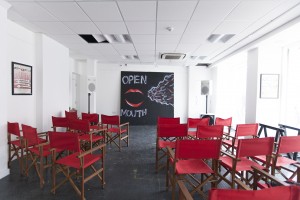 In the morning pupils from a local school attended workshops designed to get them thinking about words.

They were split into 3 groups to rotate between 3 sessions. The Open Jar Collective put a foodie twist on things and each group was given the opportunity to paint a plate which will be used in the new Stove Cafe. 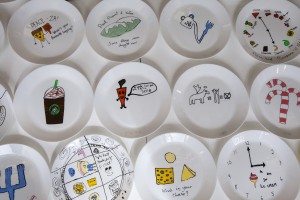 All the participants were keen to come back to the Stove for other events “I’m coming back to eat off my own plate”, said one, “my mum will be so impressed”

At the same time as these workshops were taking place Poet Eryl Shields was conducting creative writing workshops upstairs. 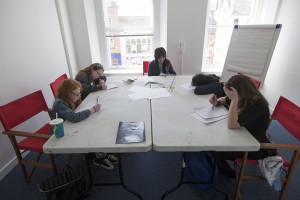 To delve into their deepest personal truths Eryl set the theme as “10 things I know to be true” Eryl said “We shared the lists, then I asked them to write a short piece in their chosen form, based on, or inspired by, any aspect of their own list. We read out our pieces and looked at how they could be redrafted to be more effective as spoken word performance pieces. I very impressed by the strength and variety of the work produced 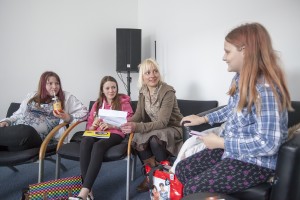 Meanwhile, in another room of The Stove’s amazing new premises,I was busy hosting Spoken Word performance masterclasses. I explained what “Spoken Word” was, what it could be and how they could make it unique for themselves. The main rule we established was that it should be your own work and it should be performed in front of a crowd. 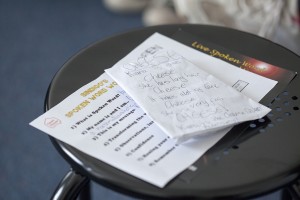 The pupils then wrote a short piece about themselves, employing emotion or humour, often both.They didn’t seem shy or scared when I told them it was time to read their pieces into a microphone. With sensitivity they were given critical feedback by myself and the other members of the group on how they could improve content and delivery. 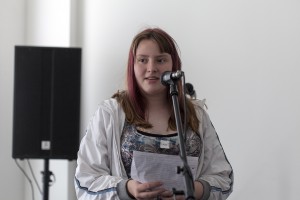 For the humourous ones we talked about ways to make them funnier- exaggerating actions, using pauses appropriately and engaging the audience with eye-contact and pointing. “Do you do this for a living!?”, one girl asked, “thats so cool, I wanna do that”

At one point some of the participants told me they could speak other languages and were able to translate their pieces into Mandarin and Lithuanian. By the end of the class we had two girls rapping about their love of cheese with audience participation sections in three languages. Yaldi!

Afterwards their teacher sent a text to say “Thank-you very much for today, the kids loved it and I thought it was really interesting and learned loads too !” 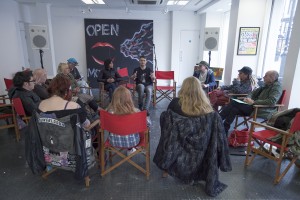 The Notorious Young Stove were also heavily in presence as well as several other local poets and keen amateurs. Sitting round in a circle talking about how we first came across writing I suddenly felt like I was at a Poets anonymous meeting.

“My names Sindigo and I’m an addict”….”How long have you been addicted to poetry Sindigo?”

But the mood soon lifted with a few laughs, participants were able to get some invaluable advice from our guests and even had a chance to perform their work and get feedback from the experts. 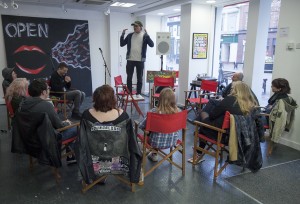 After the briefest of pauses for pizza and ginger beer, I took to the stage to announce the evening performances and thank the wonderful folks of The Stove for making it all possible. Scottish Slam champion Bram broke us in and was incredible as usual with his haunting portrayal of the inner psyche and poignant references to politics and personal anguish. Local poet and keen appreciater of the Stove Peter Angelini provided a sentimental and romantic look at Dumfries and the surrounding area with his infectious smile winning over the crowds. Next up was our incredible school girl Annemarie who had taken part in the morning workshops. She bravely took to the stage and melted our hearts with a poem about her baby sister’s ginger afro and her heartshaped freckles. I was swelling with pride at my wee protege. Young Stovers were the real stars of the show, Ivor Gott wowed us with a poem wrote on the day about mother earth, Cara McNaught sauntered on to the stage with real style and blasted out an accomplished rap as if she’d been doing it for years. Then Rhiannon Dewar bared her soul with a hard hitting piece straight from the heart. She modestly declared afterwards “I definitely found it a cool experience”. Steven Rogerson proved himself to be an accomplished writer of personal experiences and his confidence shone out on the mic. All future stars in the making! 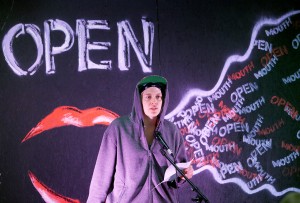 Mark McGhee of Jakal Trades showed us why he’s always an asset on any bill with his faST-paced social commentary and wit, inventing his own words and getting the audience chanting along. His poem about Edward Snowdon is still one of my favourites and he absolutely smashed it to rapturous applause. 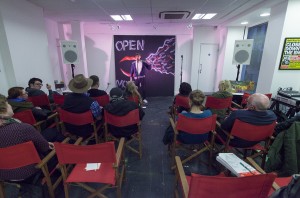 Eryl Shields’s refined and etheral style conveyed wonderfully her polished poetic narrative. Catherine Major had a punchy slam style and her savvy performance was an asset to the show. Herald at the Stove and all round ray of light Moxie de Paulette gave us a rousing reaction to the election including a mighty fine impression of Nigel Farage. Ginger, a local professional took us all to muddy fields and festival shenanigans with his take on some tradition Burns, twisted through psychedelic raving and all night swallying.

Emily Elver, another rising star on the scene threw out another phenominal performance. She had us all in stitches with her sci-fi foreplay piece and demonstrated why she’s a much loved talent and unstoppable force of spoken word alchemy. She said, “Open mouth was one of the best events I’ve had the privilege to be involved in. The workshop was buzzing with new voices and experienced performers. The open mic showcased how many amazing new performers Dumfries & Galloway has. Could not have been more impressed with The Stove team, and Sindigo’s hard work.” 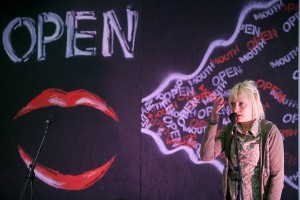 I enjoyed introducing everyone and felt an electricity running through my body every time I went on the mic. It was actually one of the best nights of my life and a celebration of everything that is coming alive in Dumfries and all over Scotland.

“This is just the beginning!!”, said Debz McDozey, leader of The Young Stove. I gave her a high five!

#OpenMouth was produced in association with the Wigtown Festival Company…..huge thanks to them for everything