What is DMC? It’s a good question. But ‘what wasn’t it?’ is better.

The third Dumfries Music Conference slid triumphantly on its knees into The Stove Building on Friday 24th and Saturday 25th April 2015 – dragging in a heady concoction of workshops, panel discussion, live music, film and a radio station in its vapour trail. With two successes under their belt and a bagful of lessons tucked neatly under their arm, this was to be the coming of age DMC. 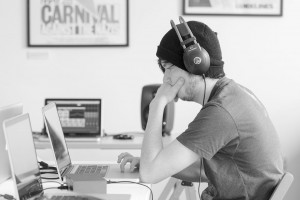 While DMC2012 and DMC2013 were important in their own right – the first one for being first and the second for being a four-day monster (lesson learned) – DMC2015 carried an extra bit of weight on its shoulders. DMC2015 WILL BE THE EVENT THAT OPENS THE STOVE BUILDING. Yeah, you heard it. That project, started by a beautiful bunch of arty folks (of which team DMC belong), with a vision for a better Dumfries, which began, like, four years ago and has had more ups and downs than the Big Dipper – that one. Not to mention the fact that DMC had been in hibernation for 18 months.

Unfurl the bunting and re-hang the banners – this has to be big!

Well, it was less bunting and more Rock Against Racism. The exhibition, which depicts the vibrant fight against fascists and racists, who have intermittently raised their extremely ugly heads over the last four decades, was on display throughout DMC2015 – on the ground and middle floors. This is the artwork for marches, demos and gigs that have stood in the name of social justice and equality for all. It gave The Stove a look that it suited to a tee and brought out a part of its personality that had been hiding beneath its blank canvas.

The major addition to the Dumfries Music Conference format this year was Radio DMC. It’s an idea that the organisers found at goNORTH Festival (now XpoNorth) and it worked an absolute treat. It gave the event a currency and monkey bars to swing
across throughout the daytime. Presenters Craig Watson and Chazz (also known as Deep Fried Soul) and Melissa Gunn (of Thursday Night Showcase on Alive Radio fame) gave it the energy and professionalism that was so vital to it. Over 20 local musicians, bands and DJs performed over the two days – going out live to the room and over the digital airwaves. The special and unique moments that Radio DMC churned out were truly unforgettable. 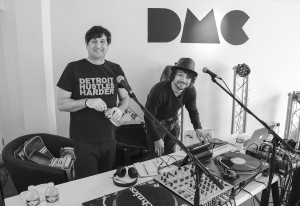 So many great Radio DMC moments. Listen back to (almost – slight technical issue) all of them here. A special mention and one of the many highlights of Radio DMC was when 15 year old Doonhamer Euan Leslie, who just happens to be ‘Young Scottish Drummer of the year 2015’, performed live and was then joined by a series of young musicians for an impromptu jam session on Saturday afternoon. The music was so sweet that Radio DMC presenter Chazz transformed himself into a rapper for an off the cuff rendition of ‘Rapper’s Delight’ by Sugarhill Gang or should we say the Stovietoon Gang – epic! 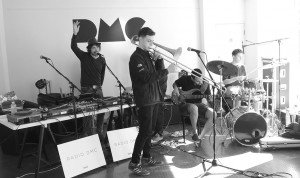 Then there was Cinema DMC – a room on the top floor of the three-storey Stove Building, which was transformed into an intimate cinema room. The general subject, of course, was music. There was: End Of A Century: The Story Of The Ramones, Who Shot the Sheriff (about Rock Against Racism), Hector Bizerk’s Bird That Never Flew, The Punk Singer and Searching For Sugarman. All in all, a nice and relaxing addition to the DMC line-up. Bring your own popcorn was optional. 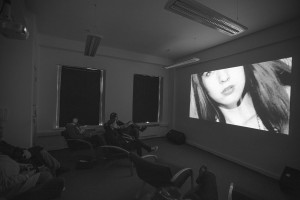 So those three things were the constants. The Rock Against Racism Exhibition was a backdrop to every DMC2015 event (apart from the cinema). Radio DMC broadcast both days between midday and teatime (6pm on Friday and 4.30pm on Saturday). And Cinema DMC rolled out the music documentaries between midday and 6pm both days. Since it began, DMC has been a bastion of sharing ideas. Their workshops are stuff of legend – and, frankly, this year was no different. MusicPlus+ have been valued DMC partners since the first event and this year the music-mentoring vehicle motored in with an absolute belter. Hector Bizerk frontman, Louie, with ‘Hip Hop was Born in Scotland’. The two-hour session provided a unique opportunity for young (and older) enthusiasts to hear from one of the UK’s most exciting hip-hop artists, who’s in one of the UK’s most exciting hip-hop groups. It was as much about knowledge and culture as it was about mastering the art – Louie was crowned King of Dumfries (for the day). 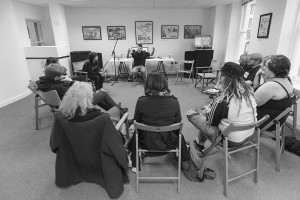 Number one soundman, Dave Miller, took charge of the other two workshops – ‘Recording Audio Using Pro Tools’ and ‘An Introduction to Live Sound’. For anyone at the live gig, which concluded DMC2015 and for which Dave was sound engineer, you’ll know the level of this man’s skills. The sound for the gig (in a pretty difficult acoustic environment) was stunning. Those who attended Dave’s workshops walked away as better people. Better knowledge. Better EQers. Better everything. Dave was King of Dumfries that day (sorry Louie). For many people, Friday night’s DMC2015 Seminar will go down as their favourite part of the event. Masterminded and held together by Derick Mackinnon (there are rumours that the D M and C in DMC come from Derick’s name, which are so far unsubstantiated, however, there is no denying how important he is to the event and its organisation), it featured a (again, this cannot be overstated) ridiculously brilliant cast of music industry movers and shakers. Let’s re-cap: Ally McCrae (manager Prides and A&R Sentric Music), Keren McKean (We Make Music Work and Deep Blue Festivals), Scott Kirkwood (manager KLOË, Hit The Road and First Run Records), Alan Morrison (The Herald), Jeff Thompson (Un-Convention and Off Axis) and Nick Roberts (Electric Fields Festival). The seminar was ace – revealing industry secrets about media coverage, records labels and management. 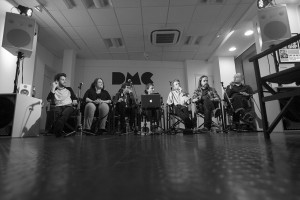 All star cast of DMC2015 Seminar

Post-seminar saw the part of the evening that all the bands and musicians in the audience (featuring a who’s who of the D&G music scene) were most excited and downright petrified about – the A&R Listening Lounge, in which their music would be played and reviewed before an audience of roughly 60 people. All acts of bravery should be commended. These particular acts received warm appreciation from both the audience and the industry experts. It could have been terrible but, in fact, it was a topper of an ending to a blinding evening and smile-inducing day. 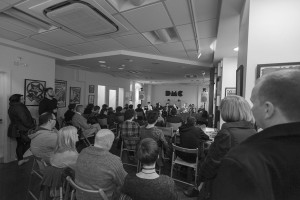 The Saturday night was, of course, crowned by DMC Live, featuring Miaoux Miaoux, KLOË,  Sean vs The Robots and MØGEN. Pretty much everybody knew this gig would be great beforehand. All it needed was good sound (check – nice one Dave and The Stove for investing in a super boss Funktion-One sound sytem) and an appreciative audience. Hello to the 100 or so (sold out) good souls who made it down for that and sorry for making you stand outside while the bands finished the sound-checks. Turns out the timings were pretty much spot on (lesson learned). It really was a treat for the ears. Afterwards, some DMCers toddled off to Electric Theatre Workshop for the aftershow, while others disappeared into the night. Whichever way, they and all who sailed its path were united by the warm glow of all that had been DMC2015. A brilliant event, in a splendid new creative hub for the town and the start of a new chapter for all. 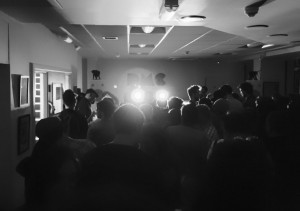