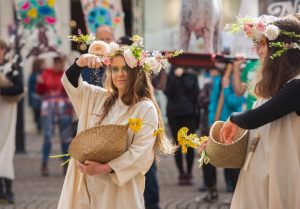 “Wow! Nithraid 2019, you really were something else. I can’t quite believe I have to let go of you now; your procession has taken up many of my daily thoughts over the past few months.

This year you were unique, a little bit of a chancer, very salty and many of us learnt something new from you whilst asking important questions along the way.

I began to conceive the idea of the Nithraid 2019 procession when I was feeling inspired by what it means to “belong” alongside the want to work with different communities. I hoped for the procession to become a celebration of what Dumfries and Galloway has to offer, whilst creating a space for people to meet and connect with those they haven’t before. It is easy to believe that nothing ever happens here and question what there is to celebrate – but I believe that together we can do so much, so let’s try it. 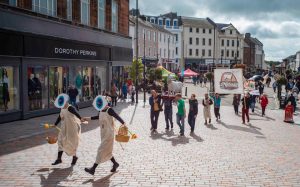 Throughout June to the end of August, with support from the Blueprint100 team and The Stove Network, we contacted over 100 community groups from Dumfries and Galloway (yes, there really are that many!) encouraging them to make a banner in celebration of who they are, with a hope that they would then walk in our procession and become a part of the day. We had great fun throughout these workshops, and although challenged by the summer holidays, we met many new faces, conversed with people of all ages, heard many fascinating stories and connected with one another in a way that we wouldn’t have been able to before, whilst spreading the word about Nithraid and our Salty Coo. 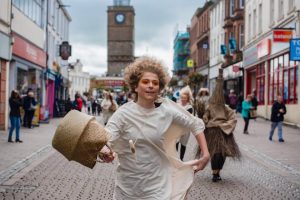 “Pagan” means belonging or relating to a modern religion that includes beliefs and activities that are not from any of the main religions of the world (for example, the worship of nature). When I discovered this, I was keen to take this idea in to the procession. Imagine what the worship of community could look like. Imagine community as a religion. One which owns its own magic and is inclusive of all. I began to think more about where our beliefs come from, what Dumfries’ beliefs are, rituals and blessings; that is where much of the vision came from. 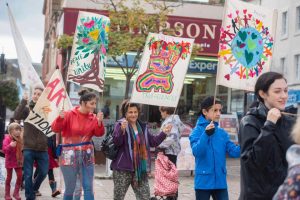 With salt at the heart of this year’s overall Nithraid theme, it felt right to use this material as the source of action for the performers in the procession. Salt has many attributes, including being used for healing and sanctuary. Together, we spread salt throughout the high street in an offering of protection and safety for all our communities. Worshiping the place many of us call home. The 2019 Nithraid procession became a subtle disruption to a normal Saturday morning in Dumfries Town Centre. One which made people look twice as they walked on by. A moving image, a ritual, a blessing, a memory, an ephemeral moment, a discovery, many hearts and one community.

This experience was a huge collaboration from the very beginning to the very end and could not have been made possible without all those involved, including community groups, The Stove Network team, performers, musicians, costume designers, make-up artists, Salty Coo carriers and volunteers. I will never forget it. 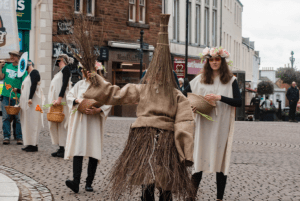 Community is about doing something together, that makes belonging matter. We are community.

Here is the salt and here is the coo, let the river have its due,

Here is the salt and here is the coo, let the river have its due,

Here is the salt and here is the coo, let the river have its due.”

Jordan Chisholm is an artist and a current member of the blueprint100 curatorial team. Find out more about blueprint100 via their website here 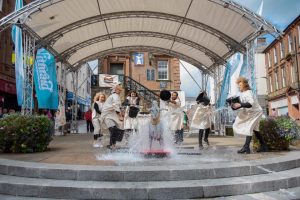