Programmers Report: The Outside In/ Permission as the form

By Martin O’Neill, Curatorial Team member and Programme Lead for The Stove Network

‘We have a tiny minority of people calling themselves artists. I am recommending that everyone should be an artist. I am not recommending in a spirit of dilettantism, but as the only prevention of a vast neurosis which will overcome a wholly mechanized and nationalized civilization.’
Herbert Read 1955

Between 2017 – 18, 100 High Street set out an agenda to become a hub of activity, treading a programme of events, workshops, films, gigs, ‘interruptions’ and discussions. Each, in its own way, opened the door to re-imagining the role of art not only on the High Street, but also aside from the main centres of ‘culture’. Its discussions were more often than not grounded in a sense of movement towards a common goal – and that was to shape a vision hand-in-hand with the community, of a new high street.
There then arrived, through this work, the establishment of the Midsteeple Quarter – with a job to continue envisioning the role of our town centre, alongside the community with a much more considered approach in its creativity, so as to create a consistency in the exchanging culture of ideas between the company, their ideas, agendas and the community. 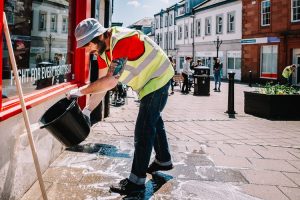 With the recent community asset transfer of the Baker’s Oven to Dumfries High Street Ltd and the unfortunate news of the private purchase of two buildings within the quarter, despite the community raising over £20,000 in small donations, there came into being something which might be termed a ‘movement’. Finally, a commonality, ignited by something outwith our control, has cemented Dumfries as a community that will not take the continuing deterioration of our High Street for granted, or something that is to be expected. As a young returner to Dumfries, I’d left my hometown with a sense of freedom, untethered to the slow unwinding of power, in the face of an international financial crisis, looking forward instead to a quicker pace. On returning, disillusioned by the mechanisms of culture embedded in much of the central belt, there seemed to be a new momentum in creativity within the town. And since then, a lot has happened.
Now the conversation has changed, because some people have changed – become ignited by the processes of making, by the open exchange of ideas, concerns and angers by freeing themselves from the idea that it was outwith their control – some might call it a revitalisation of local democracy. (Shrugs and slinks back)
Now with this, what’s left to do? By no means is this conversation over. But it’s time to return to something based on the principles, which lead to the formation of the Midsteeple Quarter. What’s to say of the role of artists (in the assumption that everyone is an artist) in the community, regardless of its place. Our High Street is now our blank canvas, our open stage and our studio.

An 85-year-old man recites his poetry for the first time to over seventy people at an open mic. A fourteen-year-old songwriter closes one of the biggest music conferences in Scotland. Thirty people, armed with boiler suits, litter pickers and paint brushes come together on a Sunday afternoon to clean up their High Street. Two local businesswomen decide to start a makers’ market. And a community group decide to turn their local area around by working hand-in-hand to change the perception of their home, for the better.
The word, above all else, is permission.
Each person, at some point, allowed themselves the freedom, through a collage of experiences both positive and negative, formative and reactionary to give themselves the permission to experience, challenge and provoke themselves into action. And thereafter, begin to challenge the structures of bureaucracy and the permissions therein.
And that’s what the Network is.
In 2019 we will challenge not only ourselves, but those around us by providing the opportunities, the experiences and the space for our members to realise their own potential through a considered programme with its feet firmly on the ground. 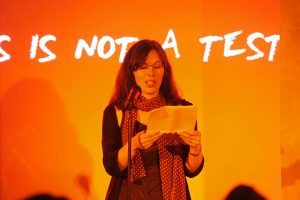 In our projects we will endeavour to uncover the stories untold, the conversations not yet heard and build the platforms necessary for something new to emerge and by doing so, offer these the permission to be shared, vocalised, staged or exhibited. In this, through the filtration of a process defined in the values enshrined by our community and the principles of a participatory art-form, as yet undefined but still discovering, we will try to unlock each person’s potential.
In 2019 and forward we’re looking into how our projects communicate not only with one another but with activities, events and workshops in and outside of 100 High Street, and thereby build new communities shaped through collective interests, whatever that might be.

Lowland will seek the stories as yet untold – past, present and future.
Dumfries Music Conference will reignite the music venue and raise awareness about women in the industry from across Scotland.
Conversing Building will expand to illuminate conversations around public space, democracy, art and civic responsibility.
Creative Futures will continue to offer the mechanisms of support and creativity for its local community to thrive.
Brave New Words is opening its doors to filmmakers, performance artists and makers of sound and light. Challenging, each month, the world at large with work from local people.
Reel to Real is growing, including nights of good food from our cafe and a programme of international film, highlighting global issues with intimate local relevance.
And 100 High Street will continue to host, produce and collaborate with our local community as well as national companies bringing to life remarkable projects that seek to inspire, provoke, engage and entertain. 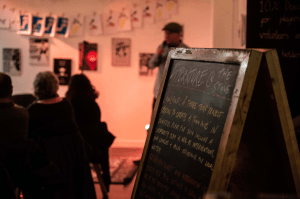 Writers Free For All in January. Image Credit: Kirstin McEwan

There are inevitable dangers in every process and practice, especially those that rely on funding. With each step that the Stove makes in its programming and its wider output, we tread deeper into an undefined land, with unexpected pitfalls, challenges and agendas that require time and sensitivity to fully appreciate and learn from. But if the routes ahead of us were already defined, we would sit in the shadow of an easier road, and in that lose who we are as practitioners with a collective responsibility.

To quote our newly completed Blue Book, a handy guide to our work at the Stove:

‘The Stove is just a part of the conversation happening throughout the world.
How can people better take control of the places they live, and by doing that, how can we create a better society for everyone?
At the heart of it, the Stove is all about Dumfries. Born from a respect for our home town, we believe we can shake things up and begin to reclaim our town as something everybody can be part of.
Sure, it’s a big idea and we don’t have all the answers but we’re not ones for sitting back and letting the big decisions happen without us.
We believe we can reclaim, inspire and forge big new ideas on community, art, and citizenship alongside our neighbours, communities and partners.
We believe that art is a gateway for people to better understand their lives, their sense of place and their rights. By doing this, through our programme and our work with partners, both local, national and international we’re building new careers, challenging the outdated ideas on community and art and making those in power listen. So, be part of the conversation. Drop in for a chat in our cafe, come see a film, perform at Brave New Words, join Blueprint100 and learn new skills or volunteer at Nithraid. There are so many ways to get involved!’

So, what are you going to do?
Come along and find out. 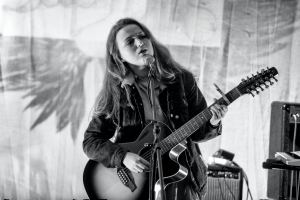