Conversing with a Town

Eight years ago a group of artists in Dumfries started a conversation. Standing here in 2019’s ‘A Year of Conversation’, this initial spark has grown into 4 separate social enterprises, which between them provide regular employment for more than 40 people and a working partnership between the community, Council and Government towards a new future for our town.

And, what have we have learned? We’ve learned that keeping the conversation going is the single most important thing of all – for conversation is an open space of possibility, it is owned by no-one, rather it is stewarded, nurtured and protected by everyone who takes part.

Inclusive Growth is the new mantra of Scottish Politics – it’s a vision of a society and an economy that does not simply value numbers, but rather supports economic activity that benefits communities, places and ALL the people who live there. For this idea to make any sense at all, it needs to be shaped and held in a conversation, one that is rooted at a profoundly local level, a conversation that is open and free to roam without limits imposed by those who wield ‘power’. Rather, the true power must be in the principle of conversation itself.

In 2001, our conversation in Dumfries began with a on open question: ‘What is the purpose of a small market town in 21st Century rural Scotland?’. Dumfries had fallen on hard times, there were in excess of 70 empty shops in the town centre. What is now popularly cried the ‘Death of the High Street’ (big retailers pulling out of High Streets because of online shopping and Out of Town retail parks) was already happening fast. We wondered what creativity and culture could do to help, it wasn’t that we had any answers to the problem that we wished to promote…on the contrary! But, we saw how important the health of the town centre was to the sense of identity within our community. We knew that town centres were places for people to gather to celebrate, to protest, to remember – but what are the mechanisms of interaction between people (commerce, leisure, services etc) that are necessary to maintain a town centre as a place for us all to gather in?? The withdrawal of big national and international concerns from our town centre created a vacuum, but it also presented an incredible opportunity for a new kind of town centre – one founded in an ‘inclusive localism’. We knew that this could only grow from a spirit of conversation which made a space for everyone’s voice to be heard. 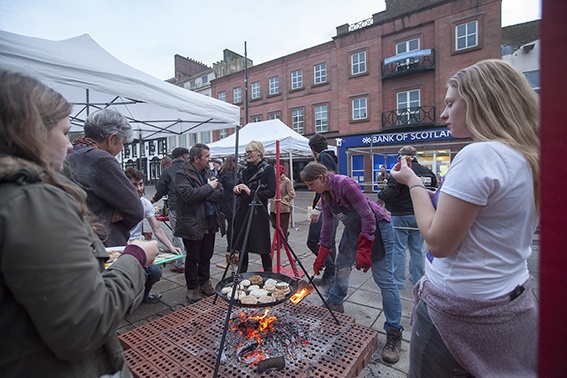 We have helped steward this conversation for eight years now – asking our question in myriad different ways..town dinner parties, a crowd-sourced Town Charter, a giant chalk drawing in the local square, an annual festival celebrating the role of the river in the town, a 2 year exploration of Dumfries’ relationship with Norway, a monthly open-mic evening for new writing – spoken or sung. We now operate two High Street buildings as ‘can-do places’ or ‘arty community centres’ or ‘alternative town halls’ depending on the flavour of the town conversation as you choose to see it.

This is what could be called ‘Conversational Practice’, but really, it is just a set of shared values about the way to treat people and to operate as a human being. Being in conversation is a useful metaphor that encompasses the three core values of our collective work in Dumfries..which could also be seen as necessary ingredients for a good conversation?:

The Stove Network is taking part in A Year of Conversation in two ways: through the first two weeks of May we are staging an interactive exhibition and series of events to explore ‘Art in Public Space’ which centres around a series of conversations with artists working in public. Then, in June, we are shaping all of our regular programming activity into a ‘Month of Conversation’. 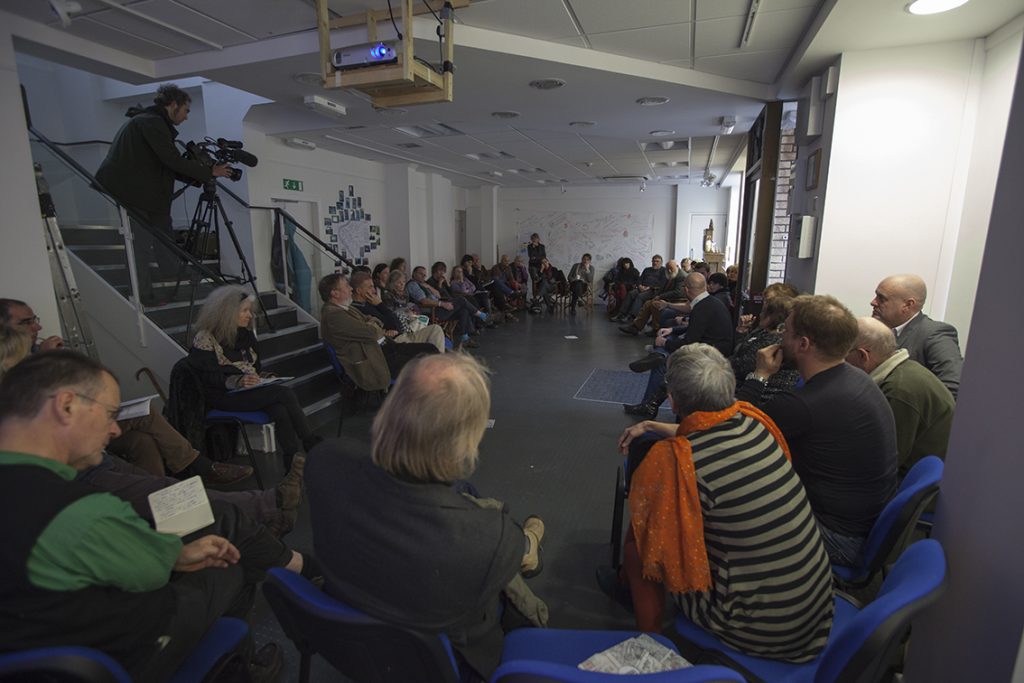 Our conversation month will also mark a significant shift in our practice as we move onto a new topic of conversation – the new conversation space that we will help to hold for our town is ‘how we grow our own culture’ and how everyone can give themselves permission to be part of that endeavour.

Pop in for a chat!

Matt Baker is a public artist, since 2011 he has focused on long-term activist strategies for the social, economic and political structures of his home region in South West Scotland. He was one of the founders, and is based with, The Stove Network in the heart of Dumfries town centre. www.thestove.org