The Procession of the Salty Coo – Performance, Creativity and Acceptance

As part of Nithraid 2016, The Stove commissioned emerging performance artists Dillon Colthart and Jordan Chisholm to lead the procession of the Salty Coo, a now annual event starting in the town centre and finishing in the river with the Nithraid’s mascot and icon, the Salty Coo raised to a great height overseeing the sailing race’s conclusion.

‘It began with a blog post, advertising various commission opportunities for young artists in and around Dumfries & Galloway. It seemed fitting that Jordan and I would apply for both in hopes of our creative flare being challenged and displayed by the time Nithraid came around in September. We were excited, nervous and determined to bring something theatrically unique, as well as highly political, to the streets of Dumfries. 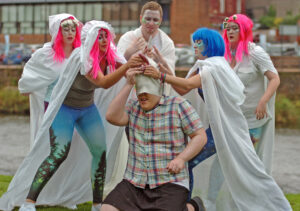 Upon receiving Nithraid’s ‘Salty Coo Procession’ commission from the Stove Network in early July, we became overwhelmed with joy and immediately began to brainstorm ideas creatively over various different types of coffee within local coffee shops throughout Dumfries with some paper, a pen and a desire to spread awareness through theatre and performance. 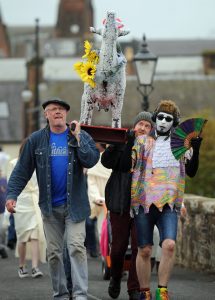 We came up with an idea to base our performance on the theme of ‘acceptance’ through queer performance whilst maintaining the meaning of the Salty Coo, which was to give something back to the river. Creatively, we challenged ourselves to incorporate movements with a strong message and create something which was both visual and aurally stimulating.

Grasping the attention of an audience in Dumfries, a place which has so much potential in terms of heightening awareness of LGBT, queer performance (such as drag) and acceptance was challenging yet liberating. We thought of ways we could get performers involved from more than just a theatrical background and made our goal inclusiveness though performance. 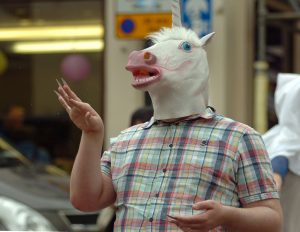 The process was overall smooth. We worked together well, got to learn more about one another than we already knew, based our teamwork on compromise and began to find a balance between our personal relationship and working relationship. It was interesting, as we have so many of the same views on various issues, yet positively challenged each other constantly to bring out our best creatively. 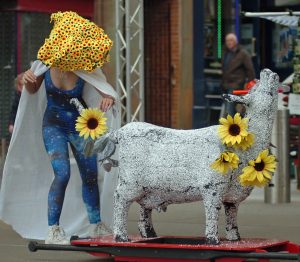 When the performance eventually came around, after weeks and weeks of preparation, we were ready to present the Salty Coo in all it’s glory – with rainbow coloured costumes, a kilt wearing – all tartan – unicorn, comic costumes, flower heads, white capes and colour bombs within the river to conclude. Our connection with the river has never been so strong, and the Coo never looked so good. 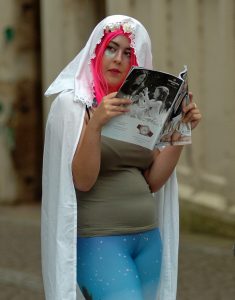 This opportunity is something which was indeed challenging in terms of managing our own time and being given a complete creative freedom, as we wanted to do our Salty Coo justice, as well as making the team at Nirthraid proud. This was an excellent commission for anyone looking to further their practise in the arts, whatever you may specialise in. From our preview performance – confined within plastic bags and smothered in paint – to the ’Salty Coo’ installation and multi coloured procession, our procession came full circle, and we couldn’t be more proud of what we achieved.’