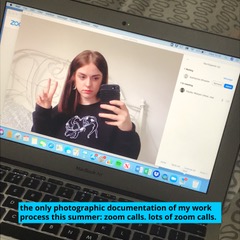 It’s September already, and I’m still trying to pare away the feeling that this month is a fresh start – a miniature new year, though distinguished by routine, structure and peeled-from-the-packet stationery rather than Big Ben’s chimes, Auld Lang Syne and kisses. The thing is though, a year and a half out of education I’ve still ended up synchronising my ‘fresh starts’ with the end of summer. I’m not sure if this is by accident or coincidence (or, if you want to get philosophical, whether or not there’s even a difference). This time last year I’d just moved to Italy, and this year I’m in the process of moving back to Glasgow, which is a phrase I think I’ve said about a thousand times since I came back to Annan.

The recurring element of how my last five summers have ended, no matter what my plans have been, is suitcases I’ve stuffed my life into and usually an obligatory Ikea trip. The suitcase zippers burst a little along the edges, and anticipatory, so do I. This time around feels like it should be the same but I’m not so sure. Italy felt like an adventure, easy to romanticize. Working for shit pay and hopping from flat-to-flat takes a while to get old when there’s late summer heat and vino-tinto-tinted streets to meet you every time you finish a shift. And the last time I lived in Glasgow, I was a student – I don’t need to expand on why that combination worked.

Beginning my latest move to Glasgow comes in tandem with the end of my contract as blueprint100’s Associate Artist supporting its re-development. Working with blueprint100 this year, after my first experiences shaping its early structure and with four extra years of life behind me, has offered an opportunity to consider the continual motions of change we experience in early adulthood and how organisational support and belonging to a community can make it all feel a little bit more… easy. When I first started working with blueprint100 I was a teenager who’d just realised creative careers are possible, and now I’m an adult (I guess?) who’s a bit overwhelmed by just how many different ways there are to pursue creativity professionally.

A huge part of my role over the past few months has been consulting past blueprint100 participants on their experience and their professional and creative needs. Reflecting on how my own professional practice continues to evolve has been really interesting alongside speaking with other young adults going through the same process – I think we’re all very excited and very ready to take on creative careers, whether full-time or freelance or whatever else (the beauty of creative work is how flexible it can be). At the same time, we’re now living through a pandemic. One excited hand locks fingers with a frustrated/confused/kind of scared one. It’s been comforting for me to understand how similar our feelings and our needs are at this stage of our lives, and this has reaffirmed how important it is – at any stage of life, but especially during the ‘uncertain’ ones – to feel like you’ve got a community behind you.

Community, then, has been a core theme that needs to be considered as part of blueprint100’s identity following our re-development this year. As blueprint100 moves forward, its membership will be re-integrated into The Stove, as it was in its very early days. As part of The Stove, we’ll be centred on creative opportunities that are community-focussed – in alignment with The Stove’s own mission. I started writing this not wanting to mention the pandemic at all (I’ve already failed) but after 2020 I really do think isolation of any kind is the last thing any of us want – including in our creative practices. For a lot of the people I spoke to, myself included, it was blueprint100 & The Stove which introduced us to working creatively in a way that might just possibly make this region feel like the exciting place you want it to be. For a lot of us again, this is something that continues to direct our creative practices. It’s an approach that’s fresh and unique when you’ve previously only experienced creative opportunities which focus exclusively on yourself and the development of your skills as an individual.

Alongside community-focused practice, the future of blueprint100 is one of building an inclusive and accessible creative community. If you’ve spoken with me at all since June when I started the initial consultations, I’ll probably have mentioned ‘accessibility’ and ‘inclusivity’ so much its borderline annoying. I’m pretty sure the words are even on my CV. That’s fine though. I believe, especially where the arts are concerned, accessibility and inclusivity can’t be taken into account enough. Throwing yourself into creative spaces when you’re not even totally sure of your identity as a creative practitioner yet is hard! And there are barriers as well to even claiming this identity alone – if you’re working in a bar 5 days a week, tired when you’re not working, and the total amount of time you can dedicate to even thinking creatively amounts to like, maybe an hour here and there, it’s difficult to feel as though you’ve got any sort of creative identity at all.

By establishing a community of young creatives in the region – whether online or eventually in the real world – we can learn that actually, wherever we’re at right now is fine, and its normal. This doesn’t mean we all need to be in the same positions, but rather that we can see creative careers don’t tend to happen in a smooth, linear, get-a-degree-then-do-a-grad-scheme way. Accessibility and inclusivity within this community should go beyond just being buzzwords. It’s making sure people feel able to speak up and even interrogate its structure without possessing 4 years’ worth of art school language. It’s shaping the opportunities within it to suit its members, rather than the reverse. It’s creating access to the space and tech to get work done because maybe you can’t get a quiet space at home. It’s knowing that maybe you can’t swap shifts to get involved with something, but people get it, and other opportunities will still be there whenever you are. No judgment.

Something I’ve gained from re-evaluating blueprint100’s role in its participants creative and professional development is a better acceptance of my own. I mentioned earlier the vast means through which you can pursue a creative practice, and as much as I said this can be overwhelming it’s also been quite reassuring. Being able to work creatively full-time in the early stages of your practice is a position of privilege, or very good luck. As with many other positions of privilege, not possessing it can have some kind of weird stigma attached. I studied Fashion Design at uni, and felt guilty every summer that I chose not to try and get an unpaid London internship. In the first months after graduating I felt guilty for not applying to graduate jobs that would cover my commute costs and little else. Since then I’ve learned that honestly? I love fashion, but I love being able to eat and pay my bills even more. Van Gogh gets touted as an icon of ‘starving artist’-hood but its reductive to think his work would be any less beautiful if he didn’t have the struggles of simply surviving to deal with. Poverty is only poetic to people who’ve not experienced it.

I guess what I’m getting at with that paragraph is that actually, working full-time in a factory and part-time in a creative role has actually been pretty good. Tiring, but good. It’s totally possible to continue the trajectory of your career while earning enough to live, and day jobs really aren’t as bad as you’re led to believe when you’re still maintaining some sort of constructive creative practice. I originally wasn’t going to move back to Glasgow until I had like… my absolute dream first graduate job. I’ve since decided that it’s equally completely cool to take a 50/50 approach to building my career instead – I’m going to be working part-time in clothing manufacture again, and spend the rest of my time working creatively on a freelance basis. It’s pretty exciting, a little like dropping everything to move to the city and become an artist but with the added security of actually having a predictable income every month.

I seem to have a talent for taking these blog posts a lot further than they’re probably intended to go (blame lockdown and reduced opportunities for rambling to people in real life). If you need a tl;dr for this – blueprint100 has developed, grown, and changed in the past few months at a faster pace than it ever has before. I have too.